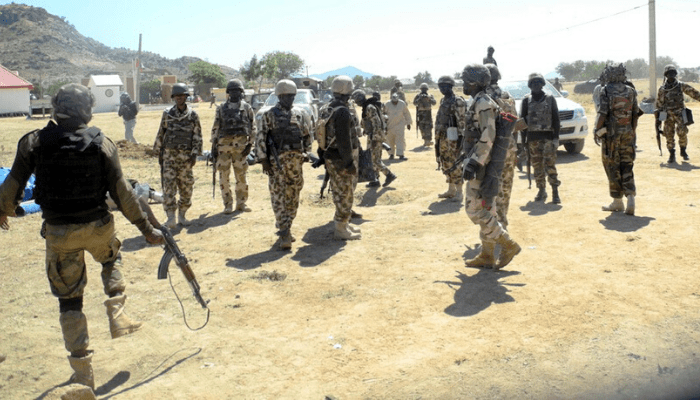 Two soldiers have been killed and four others injured in an ambush by Boko Haram/ISWAP fighters along Damboa-Maiduguri road, Borno State.

John Enenche, Coordinator, Defence Media Operations (DMO), who disclosed this on Wednesday in Abuja, said 17 terrorists were also killed in the attack.

The Coordinator said the troops of 25 Task Force Brigade deployed at Damboa in conjunction with elements of Sector 2 Special Forces while on clearance operations along Damboa -Maiduguri Road on Tuesday, 7 July, encountered the Boko Haram ambush team along their axis of advance.

“Instinctively, the valiant troops out flanked and engaged the criminals with an overwhelming volume of firepower forcing them to withdraw in disarray.

“In the aftermath of the encounter, 17 Boko Haram/Islamic State’s West Africa Province criminals were neutralized as several others were believed to have narrowly escaped with varying degrees of gun shot wounds while a cache of arms and ammunition were equally captured by the gallant troops.

“Regrettably, 2 valiant soldiers paid the supreme price while 4 others were wounded in action. However, the wounded in action soldiers have been evacuated to a military medical facility and currently responding positively to treatment”, he said.

Enenche further informed that the theatre Commander Operation Lafiya Dole has been directed to immediately deploy a Special Forces Battalion to reinforce and dominate Damboa – Bulabulin – Maiduguri axis to completely deny the terrorists any chance of escape during the final assault against the criminals.

Relatedly, the coordinator also disclosed that the troops of Sector 3 and Air Task Force (ATF) of Operation Lafiya Dole have killed several terrorists who attempted to breach Gubio Town in the Northern part of Borno State.

He said a gun truck was destroyed by the combined efforts of the land and air forces during the attack.

“During the encounter, a Nigerian Air Force (NAF) Intelligence, Surveillance and Reconnaissance (ISR) aircraft and fighter jets were scrambled to the location. The ISR aircraft spotted the terrorists in their gun trucks and vectored the jets to engage them, neutralizing one of the gun trucks and its occupants.

“The ISR aircraft continued to provide situational awareness as the ground troops engaged the terrorists on the ground, inflicting further casualties on the terrorists”, the coordinator said.