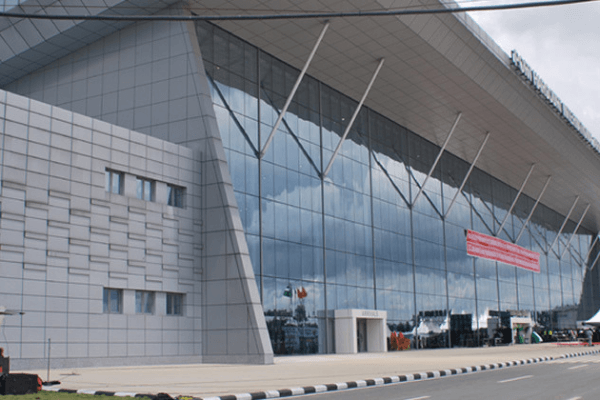 This is the king and first military administrator of old Rivers State, Alfred Diete-Spiff, was one of the first fliers from Port Harcourt as he headed to Abuja. He commended the measures put in place for safety and to block the spread of the coronavirus.

There is no fares increase yet despite a reduction in the number of passengers.

Normal flights have been grounded for three months because of the Covid-19 pandemic and lockdown.

At about 7:00 am, apprehension at the international airport became high with the announcement of an incoming aircraft. The tension was still high when the first aircraft, Air Peace, with flight No. 5N BUV, taxied in from the runway.

The aircraft which is one of the small ones in the Air Peace fleet came in from Lagos with about 33 passengers on board.

Shortly after, another aircraft, this time from the Arik Airline, came in with about 25 other passengers.

All the flights successfully and safely landed at the airport without problems and in the midst of tight security and safety measures put in place by the Federal Airports Authority of Nigeria (FAAN) and all security agencies at the Airport.

According to some of the incoming passengers who spoke with newsmen, their flight experience in the Airport was a pleasant one.

One of them, Ore Oluwa, said he was pleased with all the arrangements put in place at both Airports. “Everything was ok and I pray they keep it up”.

Another passenger, Michael Obiameche, said he was happy at the strict adherence to the Covid-19 rules at the Airport.

The monarch and former military governor of Old Rivers State, Alfred Diete-Spiff, who was on his way to Abuja, gave nothing but kudos for the re-opening of the Airport and the arrangements put in place.

The Port Harcourt Airport manager, Felix Akinbumi, who spoke with us at the arrival hall, said he was very happy because of what he described as a very major event.

According to him, the re-opening of the Airport after three months and the fact that the Airport was back to business was glad news and positive development.

The Head of Medical Department at the International Airport, Nuhu Wadi, said he was happy that both the arriving passengers and the workers at the Airport were observing the rules and guidelines put in place seriously.

Meanwhile, the Rivers State Government Protocol Lounge at the Airport was still under locks and keys because of its dilapidated state. The Lounge was in a bad state before the closure of the Airport and became worst during the pandemic and the lockdown.

The State Government had announced measures to re-activate the facility soon.