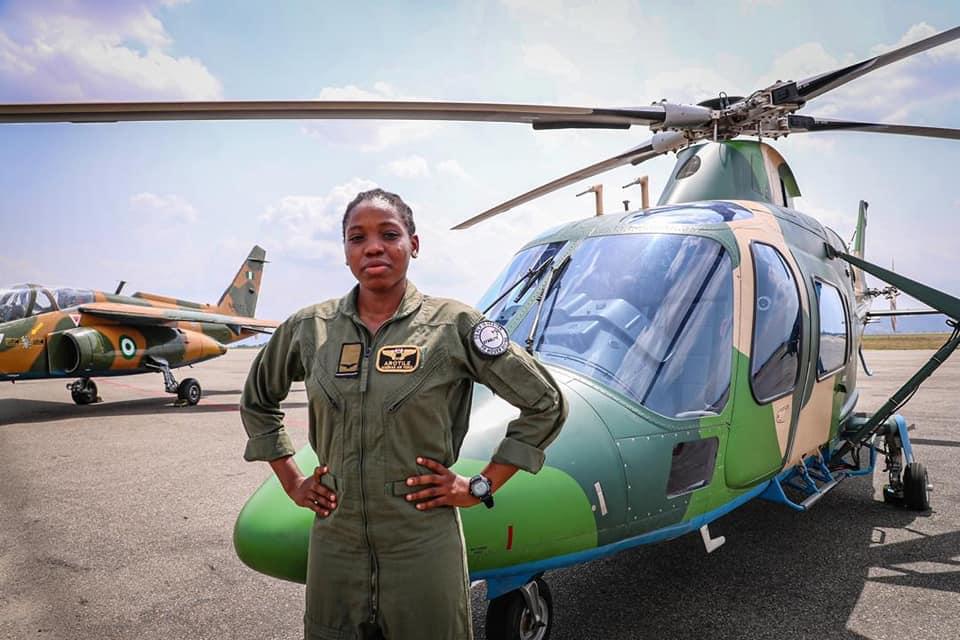 She flew her quota of anti-banditry combat missions to ensure a safer, more secure Nigeria.

When the Nigerian Air Force (NAF) on October 15th, 2019, made history with the decoration of the first female helicopter Combat Pilot, Flying Officer Tolulope Arotile, with their pilot wings after 55 years, little did they know that eight months after, the celebrated pilot will be killed in such regrettable circumstances?

The Flying Officer Arotile met her untimely death inside the NAF base when her vehicle was hit inadvertently by the reversing vehicle of an excited former Air Force Secondary School classmate while trying to greet her.

Spokesman to the Nigeria Air Force (NAF) Ibikunle Daramola announced her death in a statement late on Tuesday.

Daramola disclosed that Arotile died as a result of head injuries sustained from a road traffic accident at NAF Base in Kaduna State, northern Nigeria.

Arotile died barely a year after she was winged as a combat helicopter pilot in the Air Force following the completion of her course in South Africa.

Describing Arotile’s career as one of “impactful service” who contributed “significantly to the efforts to rid the North Central States of armed bandits and other criminal elements, Daramola said the combat pilot flew several combat missions under Operation Gama Aiki in Minna, Niger State.

“We pray that the Almighty God grant her soul eternal rest.”

She was commissioned into the NAF in September 2017 as a member of the Nigerian Defence Academy Regular Course 64 and later became a first-ever female combat helicopter pilot in the service in Nigeria.

Daramola extended the commiseration of Arotile’s death from “the Chief of Air Staff, Air Marshal Sadique Abubakar, on behalf officers, airmen, airwomen and civilian staff of the NAF, commiserates with the family of late ‪Flying Officer Arotile over this irreparable loss.”

At the winging event in 2019, the Minister of Women Affairs and Social Development, Mrs. Dame Pauline Tallen, had noted that the winging of the first-ever female fighter pilot and first female combat helicopter pilot produced by the NAF, is a commendable feat.

She disclosed then, that it shows that NAF is a gender-friendly institution that has continually strived to provide equal opportunity for both male and female personnel adding it has portrayed the Service in a good light.

“We are indeed proud of the milestones attained by the NAF and the achievements of the Chief of the Air Staff,” she added.

An elated Air Marshal Sadique Abubakar, the Chief of Air Staff, had noted that the ceremony of winging Arotile and her colleague marked a milestone in the history of the NAF and expressed his delight over the achievement.

He said he was particularly happy because the 2 winged female Regular Combatant officers/pilots were also outstanding aviators.

He revealed that the first female fighter pilot was trained in the United States, following an excellent performance during her initial flying training course at 401 Flying Training School Kaduna, while the second graduated from Starlite International Academy.

Arotile had after the winging stated that she joined the military because of her passion. She said it was a dream and her long time ambition to fly.

She was commissioned into the Nigerian Airforce for 16 September 2017 as a member of the Nigerian Defence Academy Regular Course 64.

In his tweet after her death, the Chief of Air Staff @CAS-AMSadique said, “She was a very intelligent, disciplined, confident & courageous young officer who added value wherever she served. As a Squadron Pilot in Operation Gama Aiki in Minna, Niger State, she flew her quota of anti-banditry combat missions to ensure a safer, more secured Nigeria.

The Air Chief continued, “Recall meeting her at Minna Airport, while on an operational visit, after one of such missions & seeing her eagerness to contribute towards the restoration of lasting peace to the affected areas.

“Her death is a huge loss to Nigerian Airforce family and indeed the entire nation’.

Her former classmate, seatmate and friend at Nigerian Airforce Primary School, Kaduna, Musa Muhammad described ‘Tolu’s’ death as very painful to him, she had a very promising career, being one of the first in her specialty in the Nigerian Airforce. He described her as very smart and focused right from primary school.”