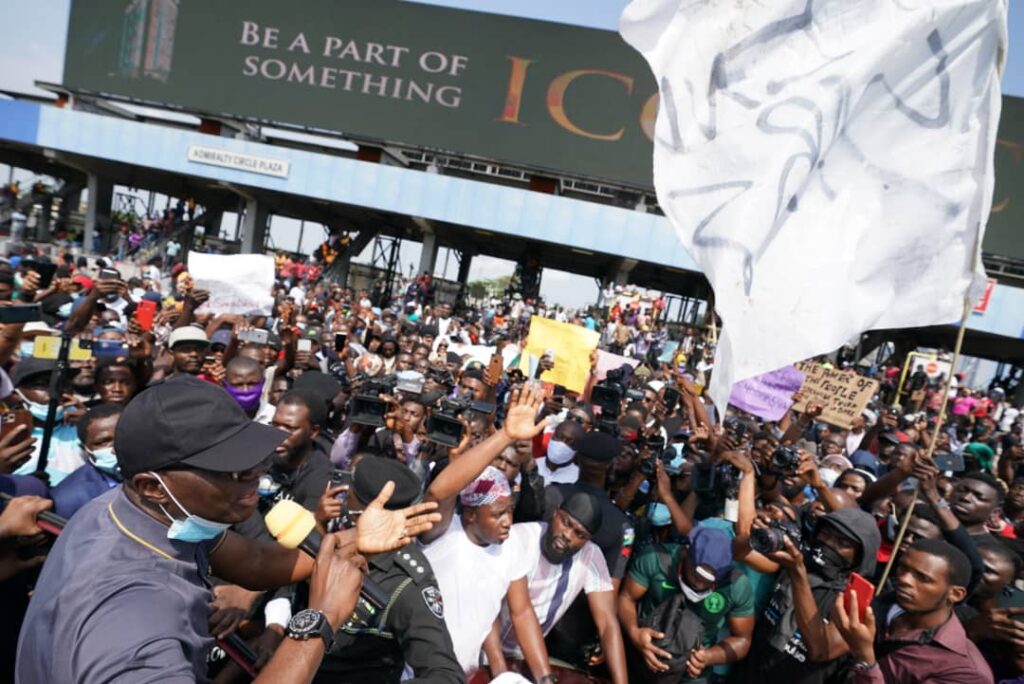 EndSARS protesters on Monday barred motorists and commuters from passing through Lekki Toll Gate on Lagos -Epe expressway in continuation of the protest demanding an end SARS in the country.

The News Agency of Nigeria (NAN) reports that the Inspector General of Police (I-GP), Mohammed Adamu, had on Sunday announced the disbandment of the Special Anti-Robbery Squad (SARS) following protests over reported excesses.

Despite the disbandment, #EndSARS protesters, in the early hours of Monday stormed the Lekki Toll Gate section of the Lekki-Epe Expressway, Lagos, to resume demonstrations.

The development led to several hours of gridlock as commuters and motorists on their way to work were on standstill while others returned home.

NAN reports that IGP Adamu had said a new policing arrangement to replace the now-defunct police unit would be announced in due course.

He added that all officers of the disbanded SARS had been redeployed with “immediate effect”.

Meanwhile, the protesters on Monday demanded that the police authorities “carry out psychological evaluation and re-training of all disbanded SARS officers before they are redeployed.”

They also demanded the “release of all arrested protesters, justice for all deceased victims of police brutality and appropriate compensation for their families.”

They also demanded “increased salaries for police officers as well as establishment of an independent body to oversee the investigation and prosecution of police misconduct within 10 days.”

One of the protesters, who pleaded anonymity, told NAN that the protesters were “demanding more than a mere disbandment of SARS but the immediate prosecution of officers found guilty of unprofessional conduct.”

“The IG only made an announcement but we want President Muhammadu Buhari to also give an executive order on this. We don’t want audio ban,” another protester said.

A protester, who works as a studio editor, Abiodun Olawale, said the people were angry because the government had been paying only lip service to police reforms.

“This is the fourth time we are clamouring for the end of SARS and we will not relent until something is done.

” Even the report of the last panel to reform the police is yet to be implemented, how can we believe the IG now,” he said.

A resident of Ajah, Justine Emejom, said he drove out of his house as early as 5 a.m. on his way to office in Lagos Island but he had to turn back after over six hours of gridlock and frustration.

“Despite efforts to maneuver through inner routes, following total standstill caused by the protesters, I had to drive back after I called my office to explain,” he said.