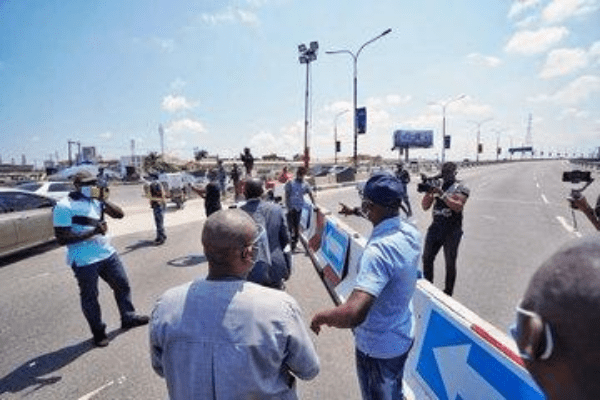 Minister of Works and Housing, Babatunde Fashola, has assured the motoring public that the traffic situation on Third Mainland Bridge, Lagos, will improve significantly going forward as efforts are being made to remove everything that impedes the free flow of traffic on the bridge and the alternative routes.

The minister, who spoke on Tuesday during a visit to the bridge undergoing a major repair that will last for six months, ordered the contractor, Borini Prono Construction Company, to widen the diversion point on the bridge by breaking the median further. He explained that this action was a response to the complaints he got on the stressful experience motorists had used the bridge on Monday.

It was really tough time for commuters on Monday, the first-day repair work started on the bridge, which is a major link between Lagos Island and Lagos Mainland, as traffic build-up characterised vehicular movements, not only on the bridge but also on almost of the identified alternative routes across the metropolis.

The bridge was closed to traffic on Friday night to enable the contractor to carry out the repair work on the 11.8 kilometres long bridge. A Dynamic Test on Bridge Expansion Joints was carried out on the bridge between Friday, July 27, 2018, and Sunday, July 29, 2018, and it was done in such a way that it had minimum impact on road users.

Thompson Osagie, a motorist, told BusinessDay he spent four hours in the traffic to reach his office on Lagos Island, coming through Surulere via Funsho William-Constain through Eko Bridge, which is one of the alternative routes.

Chukwuemeka Ihe, who lives on Airport Road Ikeja and works with one of the frontline automobile dealerships in Victoria Island, told BusinessDay that accessing the Island on his way to work in the morning was not a problem, but lamented that he drove into a high volume of vehicular traffic while exiting Osborne Road in Ikoyi, linking the Third Mainland Bridge.

“As you are aware, some of the offices, including ours, are now working from 8 am to 3pm instead of the extended official closing hours of 5pm, and afterward due to the Covid-19 safety protocols, and that is the reason I decided to leave the office by this time,” he said.

Patience Jakpa, a banker who also lives in Ikeja and works in Lekki, said she had to make a detour, moving towards Carter Bridge when the feedback on her Google map indicated that exiting the 11.8 kilometer bridge was not looking good.

On Ikorodu Road-Funsho William, connecting Costain, the traffic situation was made worse by the usual long rows of petroleum tankers and container laden trucks making their way into Apapa.

Over 650 officials of the Lagos State Traffic Management Authority (LASTMA) complemented by their counterparts from the Federal Road Safety Corps (FRSC) mobilised by the government to man various routes could be seen making efforts to have motorists drive orderly to connect some of the alternative routes.

But the general manager of LASTMA, Olajide Oduyoye, said the efforts of his men were being made more tasking by the activities of the truck drivers on some of the routes.

“The issues at the moment are trailers parked by Ijora Olopa-Costain – that is a serious link between Carter Bridge and Eko Bridge – which is affecting traffic.

“It is imperative those trucks are not parked there. When you now have two trailers breaking down close to each other, it gets worse. Our officers are on ground to manage the traffic as much as they can in the circumstances,” said Oduyoye, adding that the enforcement of proper parking by trucks should be a concern of all stakeholders.

On the barricaded Adekunle-end of the Third Mainland Bridge, officials, on Monday, battled to ensure the flow of the heavy traffic, just as some motorists who talked with our reporters lamented time lost in the build-up.

But Oduyoye assured the situation was not overwhelming, noting that it should get better as motorists adjust to the new reality and accept the fact they need to exercise patience on the bridge and all the designated alternative routes given that the bridge would remain partially closed for the next six months.

It should be recalled that a traffic report on the Third Mainland Bridge in 2002 estimated the number of vehicles in both directions of the bridge under a period of 12 hours was 180,902. This may have doubled or tripled after 18 years. The vehicular density may even quadruple as a result of the road closure.