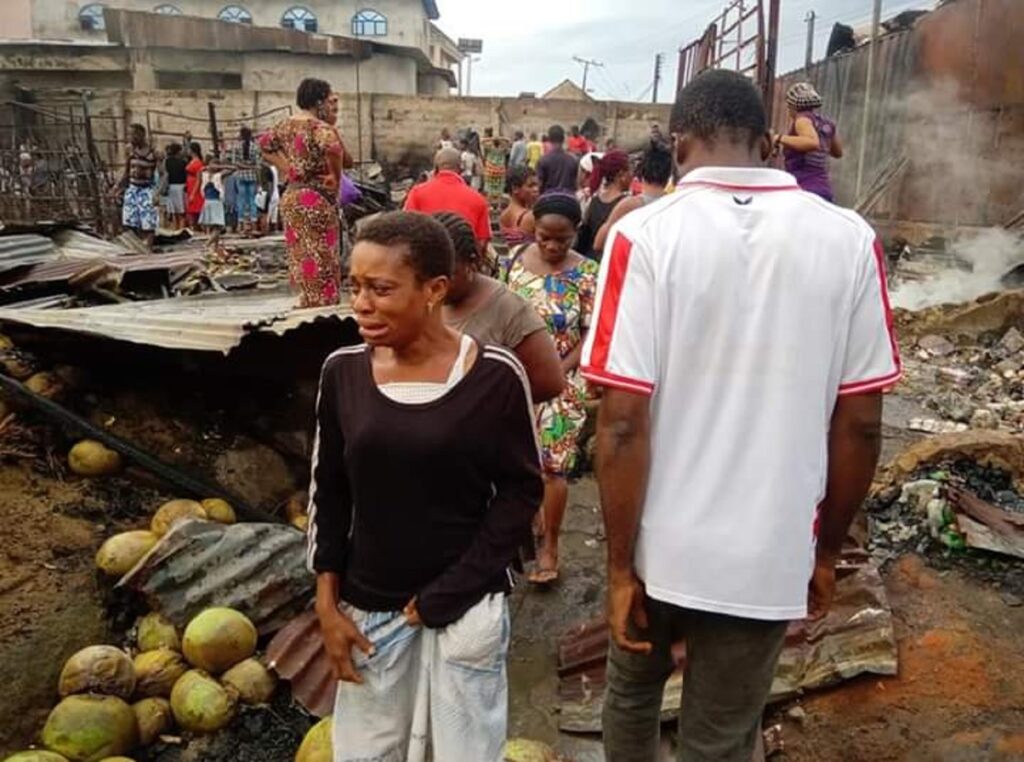 Fire Service told us they didn’t have diesel ― Victims

Items worth millions of naira have been gutted by fire which wreaked havoc on over 100 shops in the popular Marian market in Calabar, late Friday night.

The fire, which started from one of the shops in the fruit section due to an electrical surge, spread to other shops and destroyed goods worth millions of naira including vital properties.

An eye witness, Mrs Cecilia Ojah told Vanguard that the fire outbreak started around 8:30 pm on Friday night due to spark from one of the shops.

“We called on the Fire Service but they could not respond on time because according to them, they had no diesel in their trucks, It took the Intervention of Nigerian Navy fire truck to help in containing the fire,” she said.

Another affected trader, Mrs Bassey said her watermelon worth N300,000 including her shop were all destroyed in the inferno.

Bassey, who spoke with Vanguard at the scene said that she usually gets her supplies from Makurdi in Benue State adding that the tragedy has rendered been her “hopeless” because it’s almost impossible for her to raise that kind of money now.

“Three days ago, I received a supply of water melon worth over N500,000 from my major distributor in Makurdi, I usually sell and make payment to him, but this fire outbreak has rendered me hopeless for now.

“I don’t even know where to start because my shop was also burnt to arches. This is too painful for me to bear under this harsh Covid-19 period,” she said.

Another victim, Mrs Theresa Okon, 48, lamented that the fire outbreak had automatically kept her out of business, adding that the source of her income and business capital had been cut off.

Okon also appealed to the government and relevant agencies, including corporate organisations to come to their aid.

On his part, Mr Princewill Ayim, the Director-General of Cross River State Emergency Management Agency (SEMA), who went to assess the level of destruction, sympathised with the affected traders about their loss.

Ayim said that preliminary investigations also indicate that the fire outbreak was caused by an electrical fault which spread to other shops.

He said: “We are here to assess the extent of damage and to also document the affected traders with a view to ameliorating their situation, especially at this period of COVID-19 pandemic.

“The state government is very responsive to cases of emergencies like this, I can assure you that something will be done to assist the victims,” he assured

Ayim, called on the Nigeria Emergency Management Agency, Nigeria Maritime Administration and Safety Agency and the Federal Ministry of Humanitarian Affairs, Disaster Management and Social Development to also come in an assist the victims to bounce back to business.