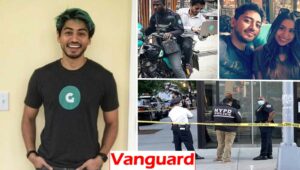 Fahim Saleh, the co-founder of ride-hailing service, Gokada, in Nigeria was on Tuesday afternoon found dead at his apartment in New York City, United States.

The “33-year-old technology entrepreneur”, Saleh’s dismembered body according to New York Times report was found in his luxury condominium building after which his torso and electric saw were detected nearby by the police.

His sister was said to have been the first to notice the body at around 3:30 p.m. when she went to check on him after not hearing from him for a day

The national newspaper report also indicated that there were several large plastic bags in the Manhattan apartment, purportedly planned to be used in packing the dismembered body.

“The police did not immediately identify the man, but several friends who spoke on the condition of anonymity said he was Fahim Saleh, a 33-year-old technology entrepreneur and the owner of the condo where the body was found,” NYT reported.

His company, Gokada, was one of the motorbike hailing service affected by the Lagos State ban of Okada (motorbikes) and tricycles on restricted routes and bridges in 15 out of the 20 Local Government Areas of the state,

The enforcement of the Lagos State 2012 state Traffic Law according to Governor Babajide Sanwo-Olu was necessitated due to the growing threats to the security of lives of residents.

Gokada according to Crunchbase has in total raised funding to the sum of $12.4 million.

The company after the enforcement of the Lagos State Traffic Law has redirected its service to delivery.