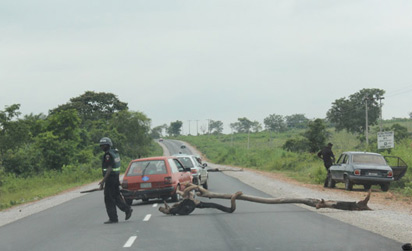 Strewn across the major highways of the country are thousands of checkpoints with the potential of increasing the duration of journeys by travelers and other road users.

From travelers/motorists experiences, a journey from Warri (Delta State) to the nation’s commercial and business capital, Lagos, which ordinarily should last around six hours, now takes over 12 hours, no thanks to the ubiquitous ‘cheque points’, sorry, checkpoints on the highway. Checklist: On the ever-busy Warri to Sapele highway, there are no fewer than four police checkpoints. Sapele to Benin starts with a checkpoint mounted by the personnel of the Nigerian Security and Civil Defence Corps (NSCDC).

The checkpoint area is interspersed with big logs functioning as barriers which had caused many deadly accidents on the road.

After this appears a cavalcade of articulated vehicles and trucks which cause mindless traffic gridlock since vehicles, more often than not, run into the logs and into a ditch.

Before the university town of Oghara, there is one police checkpoint.

Ologbo is equally burdened with police and military checkpoints on each side of the road.

Before Benin-City, the Edo State capital, there is another ‘Civil Defence’ checkpoint.

And, especially because of the inherently bad road, vehicles resort to driving against traffic and this ugly development causes accidents, with many ending fatal and claiming precious lives.

Before getting to the bypass, by the bypass and after, there are no fewer than three military checkpoints, deployed there ostensibly because of the pervasive insecurity in the country, especially Boko Haram insurgents and herdsmen incessantly marauding southern Nigerian farmsteads as well as the ransom-angling kidnappers.

Curiously, the personnel of the Federal Road Safety Commission (FRSC) are also in this unwinding bypass.

Fact is that policemen are even the present threat, not the soldiers who generally mind their business and restrict the scope of their surveillance.

But the police, in their bid to collect bribes, would delay vehicles and their owners and often take them out of earshot into the surrounding forest for maximum bargaining and resultant exploitation.

They even log into, especially, expensive cellular phones ostensibly looking for so-called ‘Yahoo Boys’ and ‘Yahoo Girls’ when their game plan is to delay and exploit the impatience of their quarries to jack up their bribes.

All these create endless gridlocks.

What is even curious is that these policemen appear in mufti, and unkempt, making it rather difficult to differentiate  the regular policeman from a masquerading armed robber or hoodlum or even a Yahoo Boy.

From Benin-City one gets to the rather sleepy village of Ofosu, where there is a mind-boggling infinity of long trucks, whose incidental immobility, caused by the bribe-collecting policemen, results in gridlock and, at their climaxes, accidents.

Welcome to Ondo State. There is a strategic police checkpoint before Ore, as well as police and ‘Civil Defence’ checkpoints at Ore Roundabout.

There is no checkpoint at the immediate suburbs of Ore; however, at the remote surroundings, there are no fewer than seven police checkpoints, left and right, causing ghastly accidents.

The two drivers died instantly while the passengers in both vehicles suffered various degrees of injuries.

Some were seen writhing in pains and had to be helped to the nearest medical facilities for treatment.

At Omotoso Town, there are military and police checkpoints.

At this somnolent outpost, there is a subsisting road maintenance programme that has consequently collapsed the road into an inductile one way, which vehicles are using, wittingly or unwittingly, causing accidents to their peril.

Between this village and another one on the road, Oniparaga, there are four, within a distance of 500 metres to one another!

Worse still, at Ajebandele, there is a Vigilance Group checkpoint, again duly slamming barriers on the road.

The Vigilance Group,  whose blithe operatives wore brown uniforms, about four of them, actually, stopped and checked vehicles.

After that point, military, FRSC and police checkpoints littered the rather bucolic landscape, spacing themselves along the expanse of road.

In Ogun State, the ‘Gateway State’, specifically in Ijebu-Ode, there are two police checkpoints.

Much to one’s relief, there is none in Sagamu, but on the Expressway in Ijebu-Ode there are four!

Notorious in using the checkpoints to fleece travelers of their hard-earned money are the personnel of the police. The general belief among Nigerians is that the police of our dear country are “fantastically dishonest and corrupt”. Demonstrably toting everlastingly itching palms, our policemen and, of course, women, use every conceivable, and even inconceivable, means to deprive, especially the poor and hapless citizens, of their hard-earned money at every turn, and at every legal or illegal checkpoint all over the country, extorting, bamboozling and browbeating motorists and travelers to part with their money.

To bring this ultra serious and, in fact,  life and death problem graphically home, a Nigerian professional who recently traveled from Lagos to Sapele in his native Delta State narrated his experience.

Ordinarily, this journey would not take more than six or seven hours in the maximum.

The middle-aged man said he started out as early as 10am in a commercial bus, but arrived his destination around 10pm.

He narrated that on that particular day he counted no fewer than 103 checkpoints even as the vehicle had to stop at almost all of them and the driver had to pay the particular detachment concerned personally for doing the work for which they take salaries.

According to him, remarkably, no group of motorists is spared this stylish robbery.

Whether it is a private vehicle or public, all must stop and pay the police illegal toll.

“If you told them you don’t have ‘change’ they would tell you they did. And sure enough, if you gave them a thousand Naira note, they would instantly return the balance without batting an eyelid”, he stated.

“In the act of extorting all kinds of motorists, they unleash a devil-may-care traffic gridlock”.

On account of the ubiquitous checkpoints, he wondered if the nation was in a war situation. Or whether the nation was about to experience what Liberia and Sierra Leone went through in the early 90s.

The professional quipped, “Are we under a siege or an emergency? Is it more than to eat and live that all kinds of strategies, from the simplistic to the utterly ingenious, are being configured and deployed to separate poor and innocent Nigerians from their hard-earned money?

“What do policemen and women do with the salaries that they are broke even at the beginning of a new month?

“Why is the whole gamut of ranks in the police so famously, or rather infamously, venal, greedy and base, indeed rotten to the core that they now even broadcast their illegalities brazenly in the public glare when they used to do the same with a remarkable degree of self-consciousness and shame in the past? “Or is there a new morality and professional conditioning in the force which sees extortion and corruption in terms of the legitimate due for wearing uniforms festooned with brass buttons and epaulettes?”

To the traveler, all these and many more questions are circumstantially pertinent.

Quite apart from their generic and patented proclivities for greed and graft and their stereotypical channels for corruption and extortion, our policemen and women are simply notorious for subverting and inverting even nationally instituted policies and programmes for personal aggrandisement and indeed enrichment, to the consternation of the masses.

A case in point was the evanescent economic lockdown and the resultant curfew imposed on the whole nation.

At the crack of dawn of this rather tragic debilitating development, some smart Alecs (policemen) instantly hijacked the facemasks imperium and the curfew to help burden their wallets.

The officio-personal rip-off worked this way. Some cops striving to benefit fiscally from the collective misery of long-suffering Nigerians instantly and shrewdly became accredited agents of the fat cats and moneybags of Nigerian businesses, who prudently calibrated the prices of facemasks and liquid sanitizers in the directional propinquinty of the seventh heaven, just to weigh down their individual wallets. So these street-smart Mammon-enamoured cops prudently procured tons of these pandemic-distancing auxiliaries on credit, shipping them to their wives and sometimes sensually-obliging house help deployed instructively to strategic checkpoints on our bustling expressways.

The strategy was to arrest any hapless and helpless passenger who didn’t wear the facemask and force same to buy one from an opportune source providentially close to the scene, thereby raking in good money.

And for some others, before the 7 o’clock commencement of the curfew period, they were already apprehending circumstantially pedestrians and charging them thousands of Naira each. And if they could not pay, they were soon brusquely herded like cattle into their malventilated catacombs that went by the name of cells.

I know many people reading this may be blaming President Muhammadu Buhari. Please, let’s leave the President out of this.

He is trying in his own way to ensure peace and safety.

Fact is, he can’t be everywhere. So let us all strive to make our country an enjoyable place to be. So, help us oh God!

Chairman, National Association of Inter-State Transporters, NAIST, Chief Mathias Uzondu, said: “We have never had it this bad as an association. Daily, we are fed with reports and complaints by our members on how security agencies exploit them on the roads. This has made a bad situation worse because, in some ways, it influences the cost of transportation.

“We understand that they are there to ensure safety on the roads, but they should stop making Nigerians regret calling for their presence on the roads. We have no problem with them on the roads, what we are worried about is the inconvenience their actions pose to road users. I am using this opportunity to call on state commissioners of police to caution their men against their reckless attitude on the roads.”

*Report filed before the suspension of police checkpoints across the country in the wake of ongoing anti-SARS protest.