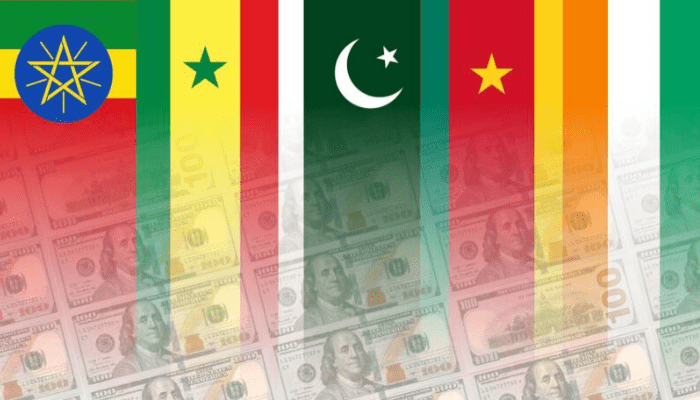 Moody’s has clashed with the UN after putting five countries on review for a downgrade in recent weeks, saying that a G20-backed debt suspension scheme poses risks to private creditors.

The rating agency took action against Ethiopia, Pakistan, Cameroon, Senegal and the Ivory Coast, after the countries opted into a G20-backed initiative that allows them to freeze official bilateral debt repayments due this year to member nations and members of the Paris Club, a group representing major credit countries.

Moody’s said participation in the scheme — which has been endorsed by the World Bank — raises the risk of losses for investors in the countries’ bonds, because the G20 has called on private-sector creditors to offer “comparable” relief. Any such renegotiation with private lenders could constitute a default and cause investors to lose money, the agency said.

The United Nations’ Department of Economic and Social Affairs has taken issue with Moody’s stance, saying the scheme “should improve countries’ debt sustainability, and therefore should not be a basis for credit downgrades”. It added: “Borrowing countries should come out of the programme with stronger credit than if they had not participated.”

Last weekend World Bank president David Malpass urged the G20 to extend the debt-relief scheme to the end of 2021, adding that commercial creditors of governments taking part in the scheme should “discontinue their collection” of principal and interest.

The scheme was launched in April as a way to help some of the world’s poorest countries manage the impact of the Covid-19 pandemic. It allows eligible borrowers to pause debt repayments to official bilateral creditors until the end of the year, and then to repay that money over a four-year period. None of the debt is cancelled.

The World Bank has estimated that up to $11.5bn in repayments could be postponed this year if all 73 eligible countries were to take part in the initiative. To date, though, only 42 have applied for relief, according to the G20, and 18 have signed agreements with the Paris Club.

Analysts said that the lack of sign-ups could indicate some wariness among governments toward taking part in the programme. Some of those that have not yet signed up are at “high risk” of debt distress, including Ghana, Haiti and Kenya, while two — South Sudan and Somalia — are already in distress, according to the World Bank.

Charles Robertson, chief economist at Renaissance Capital, said there could be a stigma attached to participation in the scheme, and that some governments want to “avoid being lumped in with countries that have borrowed excessively in recent years”.

The G20 said sign-ups to the programme had “significantly accelerated” since last month, when it clarified that opting in did not oblige countries to ask private creditors to renegotiate terms.

Moody’s said its reviews, which are open-ended, indicate that the agency was uncertain about whether private-sector creditors would incur losses as a result of countries signing up to the scheme. Matt Robinson, head of the sovereign risk group’s Middle East and Africa team at Moody’s, said that it would not be appropriate, in that context, to assign the usual “stable outlook” to the rating.

“We need to acknowledge there’s a risk,” he said. “The IMF and the World Bank are in a very influential position, [able] to exert pressure on sovereigns to implement measures that could ultimately be credit negative for the private sector.”

Moody’s acknowledged that the governments of Senegal and the Ivory Coast had committed to repaying private creditors, rather than asking them to renegotiate terms, but noted that those promises were at odds with the G20’s call for private-sector lenders “to participate in the initiative on comparable terms”.

Fitch, another major rating agency, said last week that relief from private-sector creditors could qualify as a default, but that it did not view this as “sufficiently likely” to affect its sovereign ratings.

Neither it nor S&P Global, the third major agency, have put any countries on watch as a result of their participation in the scheme.

The Institute of International Finance, a trade group created in the wake of the Latin American debt crisis of the early 1980s, said last week that none of the banks and asset managers it had surveyed about the initiative — which together manage almost $25tn in assets — had received any formal requests for debt suspension from borrowers, though a few had received informal inquiries about the process.

Daniel Bradlow, professor of international development law and African economic relations at the University of Pretoria, said that it was sensible for borrowers to seek whatever flexibility is available to manage the Covid crisis.

Such nations will be “best positioned to get new lending” in future, he said, rather than those that have “carefully paid back their debts on time, all the way through the crisis — at the expense of people’s health”.