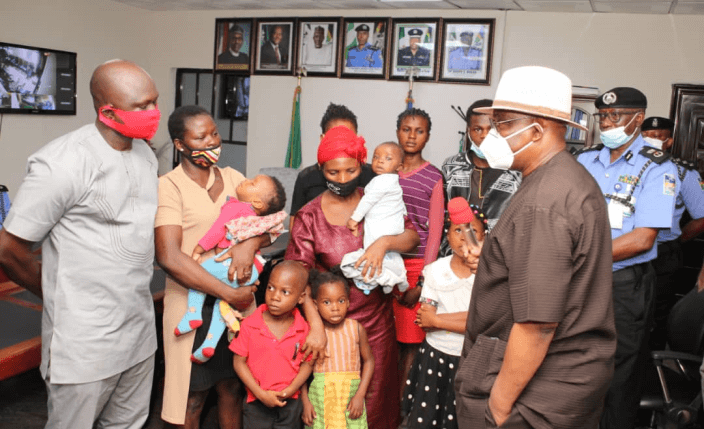 Each soldier and policeman who died in the recent EndSARS rioting in Rivers State is to get N20m. This is as the Rivers State government has waved 5000 civil service jobs to the youths of the state, not above 35 years,

The two decisions were announced Wednesday October, 28, 2020, in Port Harcourt after a long lasting state executive council meeting in the Brick House in Port Harcourt and at the condolence visit to the police command.

The state government is also to rebuild all police stations burnt in the crisis but promised to stamp out any terrorist organization in the state.

The governor who was accompanied to the condolence visit by the Secretary to the State Government, Tammy Danagogo; the Commissioner of Information, Paulinus Nsirim; and the Attorney General and Commissioner of Justice, Zacchaeus Adangor, described the gruesome murder of the policemen and soldiers as unacceptable and unfortunate.

He stressed that the state government will support the police to make sure that all Indigenous Peoples of biafra (IPOB) members who he said masterminded the killing of the policemen and soldiers, as well as the wanton destruction of police stations in Oyigbo, were apprehended to face the full wrath of the law.

Apparently moved by the presence of the grieving wives and children of the killed policemen, Gov Wike, vowed to ensure that IPOB will no longer exist in any part of Rivers State. According to him, the killing of policemen was one crime that the State government will never condone.

The Commissioner of Police, Joseph Mukan, said the governor has demonstrated he is a compassionate father of the State. He explained that the Police and the Army have taken over all IPOB strongholds in Oyigbo and will ensure that the group ceases to exist anywhere within the State.

No word was said yet about other citizens who have been killed and who lost property.

After the executive council meeting, the government approved the employment of 5000 youths into the State Civil Service.

Briefing journalists after the meeting, the State Commissioner for Employment Generation and Empowerment, Mr. Sylvanus Nwankwo, said the youths must not be more than 35 years.

He said there are existing vacancies in the civil service needing Engineers, Lawyers, Medical Doctors, Technicians and other fields of profession that these youths will fill.

Also addressing journalists, the Commissioner for Information and Communications, Paulinus Nsirim, said the recruitment drive undertaken by the Wike administration will cushion the employment gap in the state.

Nsirim also said that the council approved that civil servants that were asked to stay back at home during the Covid-19 pandemic lockdown are to resume work on Monday 2nd November, 2020.

Nsirim stated that the current Commissioner for Transport will now be in charge of the Ministry of Chieftaincy and Community Affairs.

The Information Commissioner also said council decided that the Rebisi Flyover will be commissioned on the 7th November, 2020 by the Minister of Work, Babatunde Fashola (SAN).

Nsirim informed that public bars that were closed for business due to the outbreak of the Coronavirus pandemic are now to open, while night clubs will remain closed.

On his part, the Commissioner for Youths, Prince Ohia said the council approval for the employment of 5000 youths shows that Governor Wike is youth-friendly.