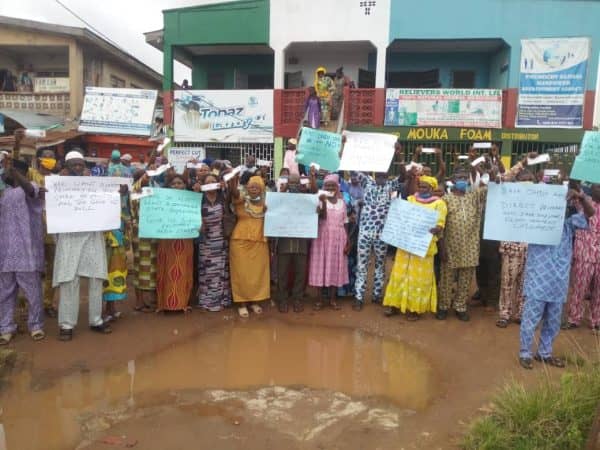 Members of the All Progressives Congress members in Ondo State have staged a protest against the indirect mode of primary reportedly adopted by the party for the July 20 primary election.

The protest is coming a day after eleven of the governorship aspirants rejected the indirect mode of the primary election for the July 20 election.

The aspirants have forwarded a letter of rejection to the chairman of the party’s Caretaker/Extra-Ordinary National Convention Planning Committee (CEONCPC) Governor Mai Mala Buni.

The letter dated 8th July 2020, titled: “Why indirect primary cannot be an option for Ondo State Governorship Primary Election,” was submitted by one of the aspirants, Chief Olusola Oke on behalf of others at the National Chairman’s office in Abuja.

The protesters said that the party would collapse in the State if the indirect primary was adopted to choose the party’s flag bearer.

Their spokespersons, Rotimi Ogunleye and Barrister Segun Ogodo said “the protest was to let the National Caretaker Committee of the party know that the APC members in Ondo State would not accept indirect primary.

“We have to protest against indirect primary because the attempt by the committee to impose it on us will not do the party any good. There is a peculiar situation in Ondo State, we have two factional state executives and in such a case, the indirect primary would not work in the state.

“Out of 11 cleared aspirants, 10 chose direct primary but only one person said he wanted indirect so if the majority of the party members said they want direct primary, the wish of the minority should not be imposed on the majority. This is a democracy.”

They added that “all the APC members want direct primary because there were two parallel executives, saying for the sake of equity, the wish of the majority of members should be respected. Without equity the whole process would be thwarted.

“We are asking for equity, the caretaker committee should listen to the 10 governorship aspirants, they must not adopt direct primary because they know the mood of the members in Ondo State. They must not adopt a mode that will give advantage to a certain aspirant over others, that is why we say we want equity.”

Adetimehin denied the existence of any court case against his executive in the state.