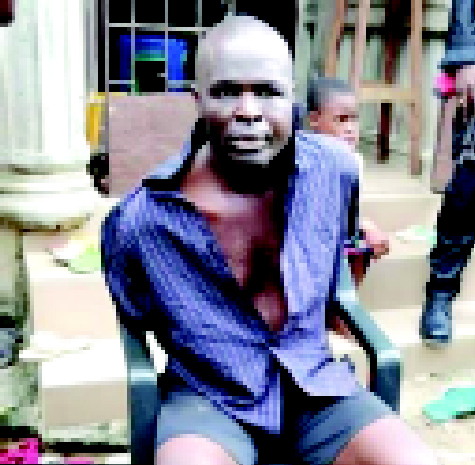 Residents of Umuebulu 1 in Etche Local Government Area of Rivers State are shocked over the exposure of Ndubuisi Anthony as alleged kidnapper and serial killer.

The operatives of the Anti-kidnapping Unit of Rivers State Police Command had arrested Ndubuisi Anthony, who deals in shoes, based on intelligence report that the suspect was a serial killer.

Sunday Vanguard gathered that Anthony, father of four children, had allegedly killed and dumped the remains of four of his victims in septic tank.

The 52-year-suspect, from Ngo-Okpala, Imo State but resident in Umuebule 1, had disclosed to the police, upon interrogation, that he killed his four victims after collecting ransom from their families.

When Anthony led the Commissioner of Police in the state, Joseph Mukan, and his men to his compound in Umuebule 1, where he had dumped the corpses of the persons he allegedly killed, it was big shocker to neighbours who had always seen him as quiet and humble.

The police recovered the decomposing body of one of the alleged victims alongside three skulls from the soak away pit.

It was also gathered that the wife of the suspect had run away when the police arrived the compound abandoning their four children.

Pastor Emeka Mba Kanu, who lives in the community, told Sunday Vanguard during a visit to the community that the suspect lived a life of isolation.

Kanu said: “I don’t know the man too much, but I know his wife very well. This man, if you see the way he behaves, you think he is an evil man.

“Firstly, he would not associate with anybody. He would not attend tenants and landlords’ meeting or come out forenvironmental sanitation.

“On Saturdays when we usually meet in this place, he will carry his bag and tell us he was coming but go out for his business.

“His children may have known the kind of evil that has been happening here”.

The cleric noted that one of   the children had a day to when the police visited to exhume those remains allegedly revealed to people around that their father killed and dumped people in their soak away pit.

His words, “When this thing started revealing, yesterday, one of the children came out to say, ‘my father used to kill people and put their bodies inside the soak away’.

“I believe many other people are involved in these killings because people get missing every day.

“I feel bad because we are God’s creatures and He has mandated us not to kill our fellow human beings”.

Prince Tony Anele, Youth President of Umuebulu Community, on his part, said the suspect may have been carrying out the alleged killings in his compound and in the presence of his family.

“I am surprised to hear that killings have been happening here. I am happy that security agents smoked him out today.

“I learned he has allegedly killed up to four people. It is strange. As you can see, his fence is very high inside the bush.

“Rivers State government should investigate houses with high fence. If the fence was low with just protector, people would have been seeing what is happening in that compound”.

Vivian Ijeze, another neighbor who also expressed shock over the alleged killings, said the suspect always appeared quiet and humble.

“I know this man very well, but I did not know that he was involved in this kind of thing. He is a very quiet and humble man, this is the least I expected to hear of him.

“The year he moved into this place is the same year I came into this community too. I am so shocked to hear this. I don’t know he has the heart to do this kind of thing.

“I feel so bitter that he has allegedly been killing fellow human beings because of money. I feel so disappointed”.

Meanwhile, Sunday Vanguard gathered that three of the alleged victims of the suspect were none Nigerians while one was from Abia State.

How I got victims —Anthony

The suspect narrated that he always killed his victims and dumped them in his septic tank immediately after their relations paid ransom.

Anthony, who claimed that he went into kidnapping because of poverty, added that since he started the criminal activity, he had received N800, 000 from the families of his victims.

He said: “I sell shoes. How I get them is I will always them to bring shoes to my house. When they bring them, I will tell them to sit down.

“When they have sat down, I will go through their back and strangle them to death. I have been doing this for awhile now.

“I collect their shoes when I kill them. I also get money. After I did this last one, police started investigating it and they started looking for me. One of my customers called me to come and when I got there, the police arrested me.”

Rivers State Commissioner of Police, Mukan, described the suspect as a serial killer, regretting that the suspect would collect ransom and still go ahead and kill his victims.

Mukan said: “We are here to recover the bodies of the victims Mr. Ndubuisi killed and dumped in his septic tank.

“He was arrested by men of the Anti-kidnapping unit. He confessed to the crime and has brought us here to remove the bodies. He is a serial killer. He would collect ransom and still go ahead to kill his victim.”

The post RIVERS’ SEPTIC TANK MURDERER: Humble and quiet, we didn’t know we were living with a serial killer — Neighbours appeared first on Vanguard News .