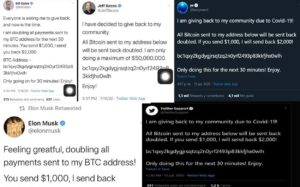 The official Twitter accounts of Apple, Elon Musk, Jeff Bezos and others were hijacked on Wednesday by scammers trying to dupe people into sending cryptocurrency bitcoin, in a massive hack of the social media platform.

Posts, which were largely deleted, were fired off from the array of high-profile accounts telling people they had 30 minutes to send $1,000 in bitcoin in order to be sent back twice as much.

“This is the same attack/takeover that other major crypto twitter accounts are experiencing. Be vigilant!”

Comments and posts at Twitter indicated thousands of dollars in bitcoin may have been sent to the scammers’ digital account.

Twitter told AFP that it was looking into the situation and would provide a statement.

“Given the accounts that got hacked more recently (Apple, Uber, Gates, Musk, etc), I am now leaning towards this being an internal compromise of a Twitter system, not an API attack from a social aggregator service,” bitcoin authority and author Andreas Antonopoulos said in a tweet from his @aantonop account.

A version of the scam invited people to click on a link at which they would be exploited.

Among the hacked accounts was @gemini used by the crypto-exchange, according to his twin brother and co-founder Tyler Winklevoss.

Twitter said it is working to fix a “security incident” after scammers hijacked high-profile accounts on Wednesday to dupe people out of money.

“We are aware of a security incident impacting accounts on Twitter,” the messaging platform said in a tweet.

“We are investigating and taking steps to fix it. We will update everyone shortly.”

Twitter, apparently in an effort to minimize the damages caused by the hacking, has blocked many verified accounts from tweeting, which is probably for the best.